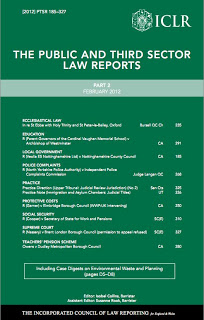 Launched in 2009, the Public and Third Sector Law Reports (PTSR) were specially designed to meet the needs of charity, social enterprise and local government lawyers and all those involved in the provision of public and community services. The  reports offer essential coverage of cases in key areas relating to the exercise of public duties and functions, public benefit, and issues of public accountability.

All case reports are written by barristers or solicitors who, in the vast majority of cases, will have attended court for the hearing as well as attending for judgment. As with all the ICLR’s full text reports, the Public and Third Sector Law Reports include an expertly written headnote summarising the essential facts and clearly stating the points of law decided by the court. They are designed to be read not just by specialist lawyers but also by lay advisers, to enable them to ascertain speedily what the case is about and why it may be relevant to a particular issue. Reports also include useful information about the procedural background of the case, and list all the previous cases cited in argument as well as those referred to in judgment. The  judgments themselves are approved by the judges concerned prior to publication.

The reports cover cases from the UK Supreme Court (previously the House of Lords), Privy Council, Court of Appeal, High Court, the Upper Tribunal, and the Court of Justice of the European Union, on subjects of interest to public service providers (particularly local authorities), including Adoption, Charity, Ecclesiastical Law, Education, Environment, Housing, Human Rights, Licensing, Local Government, National Health Service, Planning, Police, Public Health, Social Security and Social Enterprise. Coverage has been expanded from 2018 to include additional cases which illustrate the application of an existing principle of law or are in some other way peculiarly instructive.

As well as the full text law reports of the most important cases, early volumes of the series (until 2015) also included case summaries or digests of recent court or tribunal decisions, providing practitioners and academics with useful additional material from cases that do not merit a full report.

Digest reports are cited with a D before the page number: [2011] PTSR D1

The Public and Third Sector Law Reports were available in print and online from 2008 to 2013 and online only from 2014, as part of the Full Suite subscription package. For online subscriptions see our Pricing page.

For missing volumes of the print edition please contact the ICLR bookshop, or email: enquiries@iclr.co.uk