ICLR.4’s “Case Info” pages are unique to the platform and give you an authoritative overview of the broader context and significance of the case. 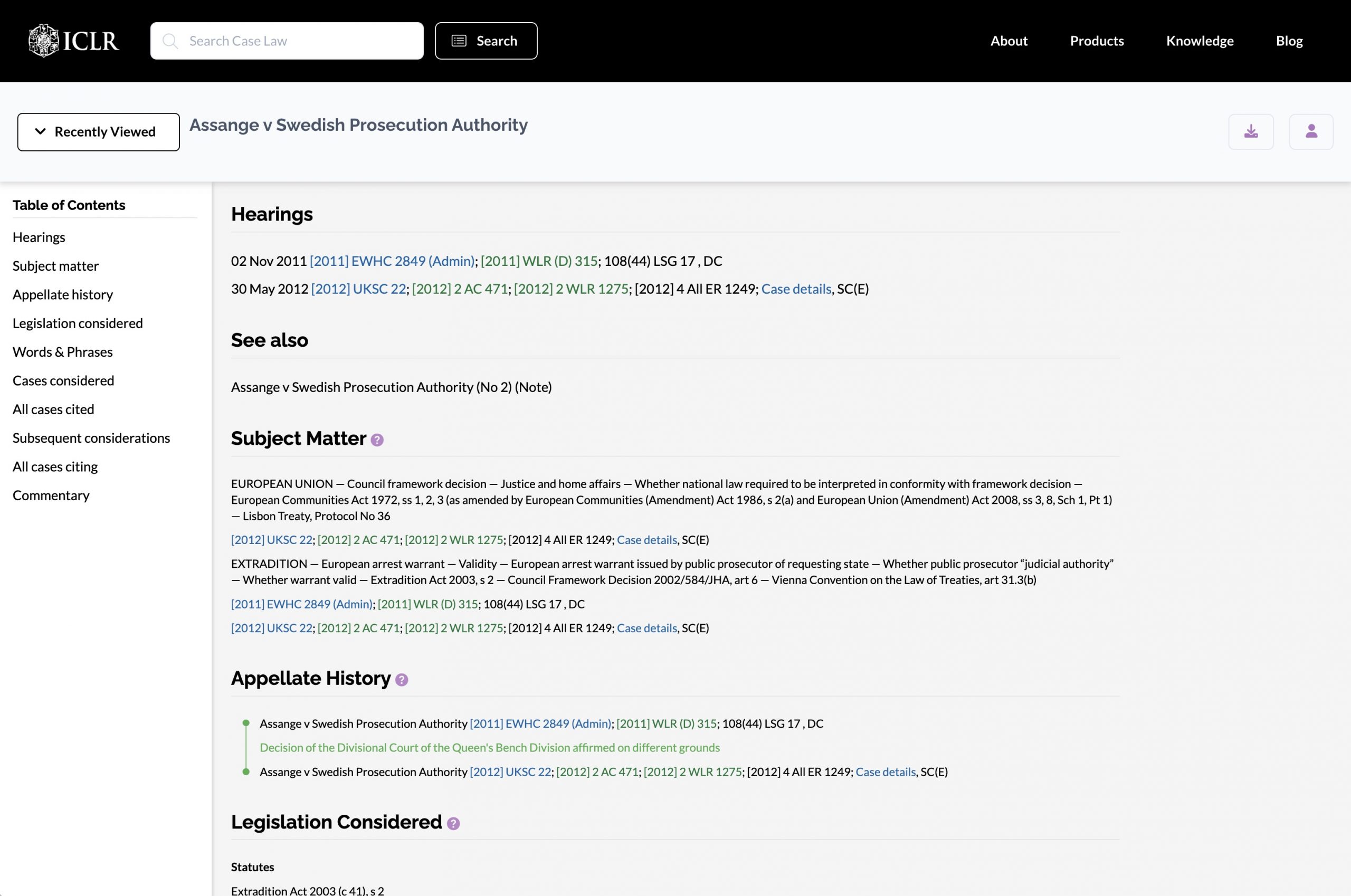 Previously known as the “index card”, the Case Info page shows you key citator information, such as the subject matter of the case, its appellate history, its relationship to other cases and legislation, commentary on the case, and its status as a precedent.

A table of contents on the left lists the categories of information available for the particular case. Only those categories for which information is available will be displayed. Click on a heading to be taken to that part of the page.

Hearings: This lists in date order all the reported stages of the litigation, which may include applications or references as well as appeals to other courts. Citations are listed in order of seniority, followed by the court abbreviation and, if recorded, the names of judges.

Additional case names, Ships’ names or cross-references to related cases may also be listed under the hearings.

Subject matter shows high level subject matter headings and catchwords under which one or more hearings of the case have been indexed.

Appellate history shows how higher courts have affirmed, reversed, varied or otherwise affected lower court decisions where there has been an appeal.

Legislation considered identifies the statutes, statutory instruments, European, overseas or international instruments and conventions or standard contract wordings which have been construed in the case. (Not all such legislation mentioned in a case will be listed, only those particularly focused on by the court.)

Words & Phrases lists particular expressions whose meaning and effect have been interpreted in the context of a particular document or legislation. (Tip. They can be searched for in the Subject Matter field of Full Search.)

Cases considered lists previous cases which have been judicially considered (e.g. applied, followed, distinguished, overruled etc) as precedents in one or more of the judgments in the case. These tend to be the cases identified in the headnote of the report. (For more on the different types of judicial consideration, see Judicial consideration: a reporter’s guide to good law.)

All cases cited lists all the cases mentioned in one or more of the judgments in the case, regardless of whether they have been judicially considered or treated as significant. They tend to be the cases identified in the blocklist of the report, where it contains one. (Note that blocklists may also list additional cases cited in argument but not referred to in the judgments.)

All cases citing lists all the later cases in which the present case has been mentioned.

Commentary lists blogs posts, journal articles and textbook paragraphs which have discussed the case, with citation references or links to any accessible online sources.

How the case links work:

Where a case name is hyperlinked, clicking on it takes you to the Case Info record of that other case.

Where a citation is hyperlinked, clicking on it takes you to the document itself.

To learn more about the case display itself, see: Case document navigation