The ICLR Busfield Prize is an annual award in conjunction with City Law School, funded by the late Miss Busfield, who worked for ICLR as a law reporter. 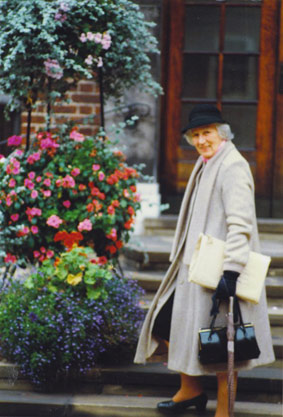 The prize is awarded to a BPTC student at the end of the academic year, who displays the best performance in the skill of Opinion Writing.

It is a fitting memorial to Miss K. Busfield who bequeathed the funds in order to help reward the achievements of students. During her working career Miss Busfield was known for mentoring students and providing support to those just beginning in the law profession.

Kathleen Nancy Busfield was born in 1909. She was the daughter of a commercial traveller who died while she was still a child. She and her brother were sent to the Commercial Travellers’ School in Hatch End. After she left school she qualified as a chartered secretary, and she worked as a company secretary until about 1960, when she decided to read for the Bar. She was called to the Bar by Gray’s Inn in 1963 and admitted ad eundem by Lincoln’s Inn in 1965, where she was in chambers at 5 New Square.

She began reporting for the ICLR in 1965 and was appointed to the Chancery Division in 1966. She continued to report in the Chancery courts until her retirement (or, as she put it, her “change of status”) in 1996 at the age of 87.

She was fiercely independent and a very private person, although she had many interests outside the law, prominent among which was her interest in her Huguenot ancestry and her membership of the Huguenot Society, of which she was a committee member for many years. She was held in great affection by her colleagues at the ICLR, and maintained her contact with them until her death in 2006 at the age of 97.

The photograph used on this page has been taken from a genealogical website about Miss Busfield’s family history.