This week’s roundup of legal news and commentary includes the police and crime, family law, and the greening of the courts. Plus some exciting news about ICLR.… Continue reading 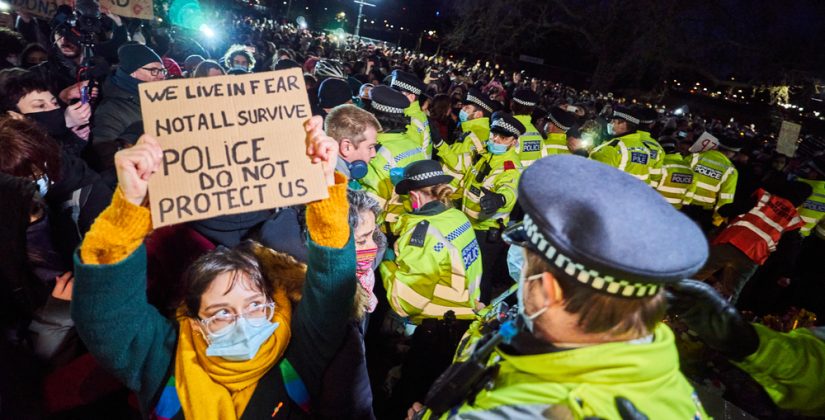 The Metropolitan Police Commissioner, Cressida Dick announced last week that there would be an independent review into the Met Police’s “standards and culture” after the kidnap, rape and murder of Sarah Everard by serving police office Wayne Couzens, who was apparently known to fellow officers as “the rapist”. According to the BBC, an ongoing Independent Office for Police Conduct (IOPC) review of how Couzens became a Met officer has found that vetting procedures missed that two of his previous cars had been linked to allegations of indecent exposure.

Meanwhile, and in response to widespread public disquiet, Home Secretary Priti Patel MP has also launched an inquiry (non-statutory at this stage, though it can be upgraded if necessary) to investigate the issues raised by Couzens’s conviction. According to the Home Office announcement:

“The inquiry will be made up of 2 parts. The first part will examine Wayne Couzens’ previous behaviour and will establish a definitive account of his conduct leading up to his conviction, as well as any opportunities missed, drawing on the Independent Office for Police Conduct’s (IOPC) investigations, once concluded.

The second part will look at any specific issues raised by the first part of the inquiry, which could include wider issues across policing — including vetting practices, professional standards and discipline, and workplace behaviour.”

Police performance more generally has also been under scrutiny. Last week Liberty Investigates (LI) reported a worrying decline in the number of hate crimes resolved by police in England and Wales over the last half-decade while reports of hate crime more than doubled in the same period.

Using Freedom of Information requests, LI asked every police force for its data on all hate crime reports received between 2015 and 2020, broken down by what the outcome was. (You can view the data used in this investigation, which has been checked by independent data fact-checkers, here.)

Analysis of the new data showed that

“Reports of hate crime — including racist, homophobic and transphobic verbal and physical abuse — rose from 52,785 in 2015 to 106,300 in 2020, in part due to public campaigns to boost victims’ confidence to come forward.

But the figures — based on data obtained from police forces across the country through Freedom of Information requests — show that only 14 percent of these victims saw conclusive outcomes from their cases in 2020, half the rate of 28 percent seen five years earlier.”

Speaking at the Jersey International Family Law Conference 2021, Sir Andrew McFarlane marked what he estimates to be the halfway mark of his presidency of the Family Division and head of family justice, by setting out his top priorities.

One of these, like his two predecessors in the post, was Transparency — making the processes of family justice more open so that the wider public may gain a greater understanding of the work that is done in the courts on their behalf. On this, he has been conducting a long-running review, the results of which he yet again promised would soon be published. He also said he would maintain his aim of

“moving the Family Court out of a silo, so that its work is seen as being of equal importance and standing with that of the Criminal and Civil courts, in order that those working in the Family Court can benefit from co-operative and jointly developed ways of working with those who (as they themselves may do so) sit in other jurisdictions”.

The second, “but in reality the primary”, topic to which he said he intended to devote “additional focus in the coming period” was the resolution of Private Law disputes between parents with respect to the care arrangements made for their children post-separation. He then spent much of the speech discussing what was wrong with the present approach, despite successive legislative changes and initiatives designed to tackle it, and welcomed the better approach proposed in a report by the Family Solutions Group, published in October 2020 and entitled ‘What About Me? He said:

“The report does not propose any change in the legislation, rather its recommendations are essentially about communication (nationally, locally and professionally) in a move away from a ‘justice’ response to parental fallout towards cooperative separated parenting, where child welfare is the central and overriding factor.”

A shift in language away from that of legal “disputes” towards that of “supporting parents to resolve issues together” is required, he added.

Read the full speech: Supporting Families in Conflict: There is a better way

Courts and tribunals across England and Wales are going green thanks to a £40m government investment to cut their carbon emissions, according to an announcement by HM Courts & Tribunals Service. The sustainability measures taken will include reducing consumption of fossil fuels by installing solar electricity panels at a number of buildings across the estate, as well as updating lighting, heating and air conditioning systems to ensure they are energy efficient. In addition, electric vehicle charging points are being rolled out to more buildings to encourage carbon-friendly travel. These and other steps are “ensuring the justice system is playing its part to tackle climate change and help meet the government’s objective to bring all greenhouse gas emissions to net zero by 2050”.

HMCTS took advantage of the announcement to remind everyone that in the meantime the Government is taking significant action to ensure our courts can operate at full throttle to recover from the pandemic and tackle delays. The £40m promised for greening up the courts is part of a £285m investment that has already been set aside for improvements to prisons and courts generally.

Next month we will be launching a major upgrade to our online case law database, when ICLR.3 becomes ICLR.4

As well as a complete refresh of the user interface, ICLR.4 incorporates a significant innovation in search technology. Case Genie is a revolutionary new search tool that uses Artificial Intelligence in the form of Natural Language Processing to analyse a user’s own document in order to identify the legal concepts and issues in it and then suggest cases from our database that might be relevant.

You can read more about the new platform on our blog: Coming soon … ICLR.4 will transform case law research.

Prof Mark Elliott on the Public Law for Everyone blog discusses the constitutional and international law ramifications of the government’s current posturing in relation to article 16 of the Northern Ireland Protocol.

“The bottom line, then, is that this is not an issue that the UK Government — however sovereign Parliament might be — can circumnavigate merely by enacting domestic legislation.”

Can the Online Safety Bill be more than a toothless tiger (or a Facebook Flop)?

Lee Edwards via Inforrm’s blog suggests that the recent Facebook Files whistleblower revelations illustrate how the Online Safety Bill’s current flaws, unless properly addressed, could result in it failing to achieve its regulatory target.

“It is an ambitious piece of legislation and the problems with it are hardly surprising. But without change … it risks becoming a moderating influence at best, and a doorway to even greater platform power, at worst.”

Paul Wragg via the Inforrm blog deplores how the BBC and the Guardian, working collaboratively, as they did in 2018, have chosen to “celebrate shamelessly this orchestrated criminal activity on the false pretense that there is some greater public interest at stake”. In fact, he says, most of the tax arrangements disclosed were perfectly lawful and the hostility directed towards them was merely the hypocrisy of bigoted Otherisers. This information was not “leaked” by a whistleblower: it was stolen.

David Allen Green via the Law and Policy Blog comments on a recent speech by the Lord Chancellor Dominic Raab MP about his plans to “overhaul” the Human Rights Act 1998, as indicated in a speech given at last week’s Conservative Party Conference (which appears to have been based on bad case law — as to which see Green’s earlier post). The point is not that the stated reasons for opposing the legislation are often bad, but why there is so much antipathy to it in the first place, and so little public and media support. “What are the actual reasons why the Human Rights Act 1998 is so hated?” He thinks there are four in number, which he briefly explains.

is from the Legal Pets Charity Calendar, selecting candidates for the 2022 Charity Calendar featuring legal pets for @billablehour16. Remember, “it’s all in a good paws” (sorry, cause).

Thank you for voting! Our finalists for June are Bella and Spike! Get your votes in below… pic.twitter.com/0ViXu6SAQB