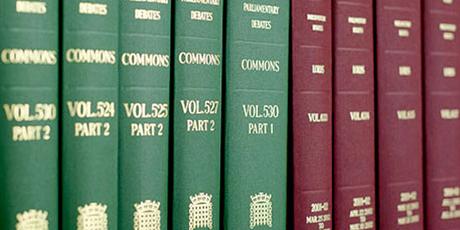 The rule in Pepper v Hart

In the case of Matthews v Ministry of Defence [2002] EWCA Civ 773; [2002] 1 WLR 2621 the Court of Appeal had to consider the effect, on a former serviceman’s claim for historic asbestos-related injuries, of a certificate issued by the Secretary of State under section 10 of the Crown Proceedings Act 1947. Having noted that “section 10 leaves one in some doubt as to the nature and purpose of the Secretary of State’s certificate” the court allowed the parties to refer to a speech given by the Lord Chancellor during debates in the House of Lords, as recorded in Hansard.

Prior to the decision of the House of Lords in the well-known case of Pepper v Hart  [1993] AC 593 such a delving into the parliamentary history of a provision would not have been permitted. There was what was described as an “exclusionary rule”. What Pepper v Hart decided was that

“the exclusionary rule should be relaxed so as to permit reference to Parliamentary materials where (a) legislation is ambiguous or obscure, or leads to an absurdity; (b) the material relied upon consists of one or more statements by a minister or other promoter of the Bill together if necessary with such other Parliamentary material as is necessary to understand such statements and their effect; (c) the statements relied upon are clear.” (Per Lord Browne-Wilkinson at p 640.)

Those criteria appeared to have been met in the case of Matthews, and the court was therefore able to admit evidence including the Lord Chancellor’s speech in the Lords in July 1947. This made clear that the issue of a certificate by the Secretary of State under section 10 of the Act, which barred the former serviceman’s claim in respect of any injury occurring before a specified date and substituted instead a right to a pension, was intended not merely as a procedural bar but actually to deprive him of a substantive cause of action. (That in turn prevented it engaging article 6 (the right to a fair trial) of the Human Rights Convention, which is concerned with procedural impediments.)

What the Lord Chancellor had said in Parliament was this:

“It is quite plain that a soldier does not lose his right of action against a fellow soldier through whom he has been injured, unless the Minister of Pensions certifies that the injury he has sustained is attributable to war service, or that he can get a pension. In other words, we must see that before we deprive a man of his right of action we give him a corelative right, by way of pension.”

Although the court said it would have come to the same conclusion anyway, they pointed out that “reference to Hansard makes this quite clear”.

To take a more recent example, in R v Kurtz (Emma-Jane) [2018] EWCA Crim 2743; [2019] QB 1195, at paras 62-66, the Court of Appeal had to consider whether section 44(1)(b) of the Mental Capacity Act 2005, which criminalises wilful neglect of a person by the donee of an enduring power of attorney, should include a requirement that, in relation to the alleged neglect, the donor lacked mental capacity or was reasonably believed by the donee to do so. Since that was a matter on which the provision was ambiguous, the court permitted reference to parliamentary material under the rule in Pepper v Hart, including ministerial statements during the second reading of the Bill in the House of Commons by the Parliamentary Under-Secretary of State for Constitutional Affairs. The court said, at para 66:

“In our judgment, these ministerial statements satisfy the Pepper v Hart criteria and provide firm support for the construction we have given to section 44(1)(b). They confirm our view that section 44(1)(b) should be read to include the requirement that the donor lacked mental capacity, or was reasonably believed by the donee to do so, in relation to the matter in question.”

The criteria for applying the rule in Pepper v Hart are fairly stringent, so the number of cases in which it is permitted is not large. But if and when they do apply, the volume of parliamentary material which might contain relevant passages can be vast. Indeed, this was one of the concerns expressed by Lord Browne-Wilkinson at p 637:

“legal advisers faced with an ambiguous statutory provision may feel that they have to research the materials to see whether they yield the crock of gold, i.e., a clear indication of Parliament’s intentions. In very many cases the crock of gold will not be discovered and the expenditure on the research wasted”.

PIO is an online database provided by Dandy Booksellers, who are well established suppliers of official government print publications. The PIO database collects and provides access to digitised parliamentary papers going back for more than a century.

The material held includes Public General Acts since 1900, House of Lords Papers from 1901, Hansard debates from 1909, House of Commons Bills from 1919, Public Bill and General Committee Debates from 1919, House of Commons Papers from 2006/07, together with more recent collections from the devolved Scottish Parliament, Northern Ireland Assembly and National Assembly for Wales, as well as Command Papers going back to 1955 and non-parliamentary papers such as Law Commission papers, Audit Commission reports and so on. Although some of this material is available in the public domain elsewhere, eg on Parliament’s own website from the start of the 21st century, or via The National Archives, the fact that it can be searched together in one place is a great benefit.

The Pepper v Hart service harnesses all this material in order to provide, for any particular Bill, a list of all the documents or debates in which it is discussed. It works like this. You select the collection, which will usually be the UK Parliament. Then you select the session, which should be the one in which the relevant bill was passed. Thus, in the first example above, that would be the session from 1946-47, in which the Crown Proceedings Act was passed. Having selected the session, you are given an alphabetical list of Bills or Acts. Having chosen the relevant statute, you are then presented with a list of publications in which it is discussed. Within each publication, you can search for a relevant phrase or quotation. That might be the particular wording which is ambiguous or obscure, or which leads to absurd results, whose meaning and purpose you want to investigate. Or you could use the title of the Act or the name of the member or minister whose speech you need to find.

At this point, you have two options. Either you can open and search within each of the listed documents. Or you can perform a search on all the documents, which will narrow down the list of results, then click on “view selected documents” to display the pages from those documents that contain the highlighted search terms identified. These pages can be removed if not relevant, or added to by adding at any point the next or preceding page. You then have a PDF document, which you can download, containing all the relevant passages to your query. This avoids the need to print out the whole of any document, if all you want is a page or two extracted from it.

There is of course nothing to stop you downloading an entire document and using that for more detailed research. But the advantage of the way the online search works is its convenience, particularly if you are looking for a particular expression in the statute whose meaning is ambiguous or unclear.

After a lot of rummaging around using different search terms, I did eventually locate the debate in the House of Lords from July 1947 in which the passage quoted in the court’s judgment had appeared.  For the record, it was cited as: “House of Lords Official Report 5th Series Vol 151 21 July – 20 October 1947. Parliamentary Debates (Hansard) Page 428” (where it was in columns 848-849).

Researching the Mental Capacity Act 2005 threw up 79 results initially, honed down to 13 publications including the terms “wilful neglect”. Confining it to House of Commons debates and House of Lords debates narrowed it down to seven. Not all the instances turned out to be relevant. In one document, “wilful neglect” related to the abuse of a child. Two of them were about the Constitutional Reform Bill (remember that!) – so not relevant. (The temptation to be distracted into reading stuff you’re not looking for is massive.) The fifth document was relevant, however. And while it was not immediately on point (meaning further searches using different terms would be required), it would certainly be one to include in your court bundle when discussing the offence of wilful neglect of a person lacking capacity.

The volume of material available from PIO is amazing. It’s comprehensive and easy to browse and locate individual documents, particularly using the advanced search. The content itself has been expertly scanned and is conveniently displayed. Moreover, it includes original versions of legislation, much of which is not available or so easily accessible elsewhere, particularly if it has been repealed or superseded.

While the Pepper v Hart service takes a bit of practice, and works better for some queries than others, there seems to be nothing comparable to it on any other legal information platform. It cannot be faulted for convenience and ease of use, and I understand that the search functionality is being further developed. (I look forward to being able to use Boolean connectors to conduct more targeted searches, for example.) In the circumstances, I would certainly recommend it as a lot easier and more convenient than the traditional method of scanning all the relevant printed materials by hand.

For subscription inquiries or a free 14-day trial, see https://www.publicinformationonline.com/subscribe