“I do not know how long it will be before lawyers can return to courts around the country rather than conducting hearings via their homes but at least until then, we are going to have to get used to virtual hearings and remote conferences and meetings.”

So writes Andrew King, a civil litigation specialist with Lennons Solicitors, in the introduction to this useful little book. But although it has arrived rather opportunely on the crest of a wave of necessity, the advice it gives, enabling the reader to become adept at conducting and participating in video conferences, would sooner or later have been essential for any modern lawyer. The current pandemic lockdown, requiring us all to transition immediately to more remote ways of working, has merely accelerated the process.

In fact a lot of us will have used the technical features of videoconferencing in some form or another simply by having and using a mobile phone, tablet or laptop over the last decade. We may not have thought of Skype or FaceTime or WhatsApp as work-related products, but that in effect is what they have become. What were once toys are now tools. And where once we may have been happy to video-chat with friends and relations without much concern about how we looked or sounded or what might be visible in the background, we are now required to present ourselves in a formal forensic setting, with all the seriousness demanded of the administration of justice. In short, we needed to smarten up our act.

King’s advice, based on his own experience along with suggestions culled from Twitter in response to his initial thread there, is divided into 50 tips. Some of them are really obvious, like checking your battery levels if your device isn’t plugged into power. Some of them may be based on bitter experience, like making sure automatic updates are not enabled, lest your software unexpectedly decided to quit and upgrade itself just before a hearing begins.

Given the demands of bandwidth, King recommends turning off video for those participants who don’t need to be visible. Judge and leading counsel may need to be visible, and can be “pinned” on some platforms (not as painful as it sounds) but a non-speaking participant may not. However, there is always a risk of someone dropping off the grid, if their wifi stutters or fails, and you or they might not notice their absence.

That is one reason, says King, why it is best to have a separate channel of communication, such as a WhatsApp group chat, to notify the organiser or your team leader that you’ve lost contact. It’s also useful for passing the equivalent of a scribbled note behind counsel. But make sure you know which group you’re in before you send a message! You may have more than one such group going, eg one for your team, another for your client. You also need to ensure the communication tool does not become a distraction from the hearing itself.

Another point that might not be obvious is that, given the demands of bandwidth when using video, it is sensible to download any documents from the cloud before the hearing begins, and to organise them on what will hopefully be a separate screen from the one you are using for the video platform. Have them open before the call, too. That way you will avoid both the risk of breaking up on the call while the download gobbles up bandwidth, and you will be ready to refer to the relevant document without that embarrassing virtual bundle-flap (was it tab 5 in bundle 7 or tab 7 in bundle 5?…)

King has some useful pointers on appearances. We are by now familiar with the bookshelves and artwork on the walls of many advocates’ studies. But it’s not just the background you need to be conscious of. If at some point you may need to share your screen, take care not to leave anything open that might be distracting, embarrassing or a breach of confidentiality. (Remember that browser tabs and favicons can be quite informative about pages that aren’t visible.)

There may be distracting sounds too, so King advises not just removing dogs and cats from the room but also checking, after every break, that they haven’t wandered in unnoticed. (Scheduled breaks are recommended, both for comfort and to avoid what’s now called Zoom-fatigue.) Children playing, birdsong outside your open window, next door’s garden strimmer, an inconvenient flight-path can all impinge on the sound world of your forensic hearing. Other unwelcome sounds include your own typing (King confesses to being a noisy typist but it also depends on your keyboard) or, as happened to me once, the printer unexpectedly starting up (in my case because someone else in the house had sent a wifi print command for their homework!) For these and other reasons, King recommends muting your mic when not actually speaking.

One of the tips is headed “Do not become complacent about technology”. King explains: “It will be easy to assume that everything will be working because that was the case yesterday or that morning. Technology is not sufficiently reliable for this.” Indeed not. So testing beforehand is good, but you need to run a check with everyone else, after each break. But suppose something goes wrong unexpectedly? One of the tips is headed, rather ominously, “Plan what will happen if you lose your advocate”.

Whether you are a beginner at this game or an old hand, I’d be surprised if there weren’t at least a few of these tips that you hadn’t thought about or encountered. Even for an old hand, it can serve as  a useful checklist. There are forewords by Susan Ackland-Hood, CEO of HMCTS, and Professor Richard Susskind, founder of Remote Courts Worldwide and an enthusiastic legal futurologist, if I can put it like that; as well as (perhaps by way of an antidote) the Secret Barrister, who says:

“That the courts have amidst a nationwide lockdown been able to remain open and functioning is a testament to the flexibility of a profession rarely celebrated for its technological gymnastics.”

So think of this book as your manual of forensic flexibility and technological gymnastics. Or as Gordon Exall (who also contributes a foreword) puts it: “Anyone involved in litigation (litigator, client or judge) will benefit from reading it.” 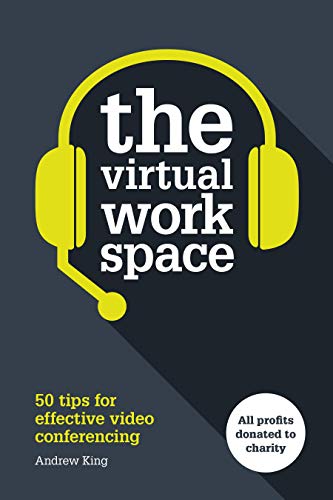 The Virtual Workspace by Andrew King (paperback, £7.99, e-book £3.95) is available from Amazon

All proceeds from sales of the book go to NHS Charities Together.