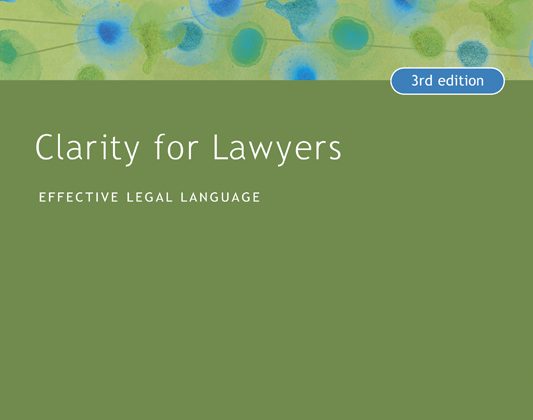 In her speech at last month’s Criminal Law Review conference, Lady Justice Rafferty warned lawyers against needless verbosity and lack of clarity in their writing and speech.

Her reflections on legal writing style were chiefly aimed at the tendency towards “long, rambling, waffling, warbling” grounds of appeal by appellate counsel in the Court of Appeal. But she also wondered why so many lawyers seem “wedded to archaic syntax and particularly the passive voice”. Yet she found time to praise at least one bit of archaic wedding syntax: the six words “With this ring, I thee wed” was one of the “most elegant sentences in the English language”. The point is their economy. (By the same token, she pointed out, the US Declaration of Independence is 1322 words, while the EU compliant regulations on the sale of cabbage take up 26,911 words.)

Verbosity and archaism are not the only sins of which the legal writer may be guilty. That’s why the latest edition of Clarity for Lawyers, by Mark Adler and Daphne Perry, is so useful. This guide to effective legal language aims to help lawyers to write more clearly, “for their own benefit and for that of anyone affected by their work”, and to help “make the law more transparent, so that its benefits and obligations are not lost in a tangle of verbiage”.

The book sets out what the authors think is wrong with legal writing, and then advises readers on various ways in which it can be put right. There are plenty of examples, both of bad practice – some of them skin-crawlingly awful – and of good. Each chapter deals with a different aspect of good writing (format, punctuation, consistency etc) or bad (vagueness, misleading expectations etc). It is clearly laid out and there are notes at the end of each chapter.

In short, it’s an example of the very practice it aims to perfect. My only quibble is that it does go into each aspect in careful detail and, although the prose is clear, the amount of it together with the examples makes the book rather more of a substantial textbook than a handy pocket guide. (For an example of the latter, I’d cite Strunk & White’s classic, The Elements of Style.)

The authors’ main target is what is generally called “legalese” – dense, convoluted writing that says more about the writer’s professional self-regard than about the subject matter of the communication. It wastes time and money, it alienates the reader, it is imprecise, and it causes mistakes to occur. For all these reasons it fails to communicate effectively. “The main purpose of this book is to persuade lawyers to abandon the bizarre tradition of treating incomprehensibility as a virtue”.

Prominent among the sins identified is the over-use of precedent, or what we might think of as drafting cliché. This is something on which Lord Neuberger comments in his foreword, explaining that

“certain expressions will have a clear and established meaning in the law, often as a result of judges’ decisions, but also as a matter of accepted convention among those practising in the relevant field. So, however poor or inapt the language of the expression may be, a cautious lawyer may well include it in a document or submission because he or she knows how it will be understood.”

The habit of precedent also accounts for the continued use of archaic language, some of it rooted in the Latin and Norman French used in the Middle Ages. (Why else would we have continued until recently to call a beneficiary a “cestui que trust”? Or to say “Nemo debet bis vexari” in a superior voice when we could perfectly well have said “double jeopardy” and been much more clearly understood?)

One of the authors’ three rules of thumb is “Ask yourself: how would I say this if I was not being a lawyer?” Unless you were showing off, you would use the English words when talking to a non-lawyer. One of the chapters is called “Be human”. It’s a useful admonition.

Another rule of thumb is to “write invisibly (so that the reader is focused on what you are saying and oblivious to how you are saying it)”. That means avoiding stylistic tics and gimmicks, which need not be legal archaisms. Florid language, whimsy and metaphors are equally out of place. It’s also important to avoid clumsy idioms or clichés. (If they can’t sensationalise it, the media often try to improve a straight story by expressing it in jokey or mocking language. That may be their business model, confusing “to inform” with “to entertain”; but it isn’t the lawyer’s.) A letter or contract or will is not a work of art: it’s a working document, which must perform a specific function. The client is paying for clarity.

The third of their rules of thumb is “Don’t meander”. This breaks down as follows:

Applying those rules, lawyers should avoid most errors. The “torrential style” of drafting – long unbroken sentences full of redundant variables – is one error that comes in for particular criticism here, some of it cited from cases where the courts have struggled to construe it. In Norwich Union v British Railways Board [1987] 2 EGLR 137, Hoffmann J observed that

“Draftsmen frequently use many words either because it is traditional to do so or out of a sense of caution so that nothing which could conceivably fall within the general concept which they have in mind should be left out.”

A typical result might be a covenant to “grain varnish distemper wash stop whiten colour or suitably treat” the woodwork in the premises, rather than simply to maintain and decorate it. Torrentialism can often be found in wills, where some lawyers seem to think they are being paid by the word. The following example is given:

“I give devise and bequeath all my real and personal property whatsoever and wheresoever situate unto my said wife Janis Andrea Mitchell for her use and benefit absolutely.”

This just means: “I give all my property to my wife.”

I could go on, but I think the point is now clear. As, I hope, will be your legal writing — particularly after you’ve consulted this useful book. No solicitors’ firm or chambers or law school should be without it.