Book review: A court of specialists, by Chris Hanretty

We examine the claims and methods of a book which is said to offer the first quantitative study of decision-making in the UK Supreme Court during its first decade. … Continue reading 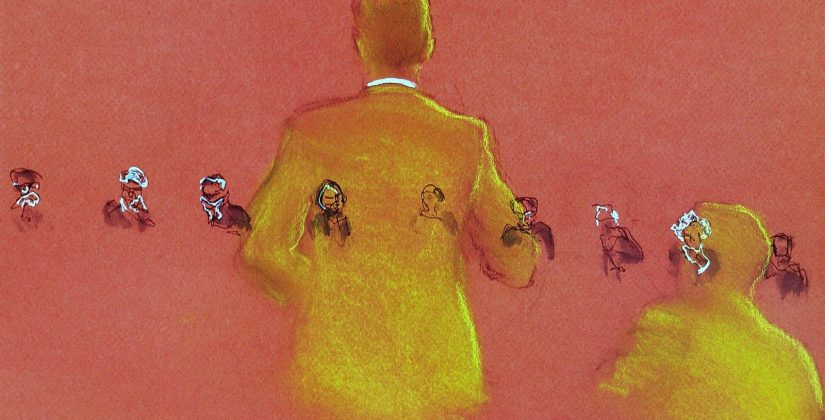 The Supreme Court of the United Kingdom has in recent years attracted a lot of public attention, some of which has been directed to anticipating how it might rule in particular cases. This is a bit of a mug’s game, though. British judges are not elected, nor are they subjected to public confirmation hearings, like those appointed to the Supreme Court of the United States. Their political views may be known, or guessed, but they are not pronounced. Judges are discouraged from involvement in political discourse, from engaging with the press or from even having an account on social media: how is anyone to guess which way they will jump on any particular case?

Chris Hanretty’s book does not attempt to do that. Rather, his book aims to identify and analyse certain factors that might influence judicial outcomes. The justification for doing so, he says, is that “the Supreme Court, by comparison with its predecessor, the Appellate Committee of the House of Lords, is deciding more cases involving political issues.”

Hanretty is Professor of Politics at Royal Holloway, University of London and describes himself as a political scientist. However, this book isn’t an examination of the political leanings of the court’s judges, along the lines of JAG Griffith’s once influential but now rather less relevant The Politics of the Judiciary. (The idea that senior judges are programmed by their elitist background always to support the establishment has taken rather a knock after decades of judicial review and human rights cases.) Nor, on the other hand, does it set out to prove or disprove the charge of “judicial activism” levelled by, for example, the Judicial Power Project: that charge is eloquently disposed of by Joshua Rozenberg in his recent book, Enemies of the People? (reviewed here). Finally, Hanretty is not (at least not in this book) concerned with “judicial analytics” — the use of big data techniques to extract predictions or detect biases from textual analysis of past decisions. But he does attempt to apply scientific methods to measurable data. It is a quantitative analysis, using different models, copiously illustrated with charts and graphs.

Hanretty’s argument is that, “compared to many other courts of last resort, the Supreme Court is a court of specialists, and that its work should be interpreted in that light”. Judicial specialism is just one of a number of factors whose influence is weighed and measured, in an attempt to assess their effect on case outcomes, but it turns out to be the most important.

Hanretty is not a lawyer, and so is able to look at these things with a fresh and potentially objective eye. Whether he is right in his methods or conclusions is perhaps of secondary importance: the point is that he makes us look at the court through a different lens.

In explaining his methodology, he says:

“It was a standing complain in early modern England that judgments of the courts of equity depended not on legal rules but ‘on the length of the chancellor’s foot’ (Selden 1856, 49); and while a rigorous study of the shoe sizes of different justices of the Supreme Court has yet to be written, it does not seem on the face of it that it would be particularly illuminating. The factors that I set out here, by contrast, all have plausible connections to behavior on the court.”

The factors he considers are

These factors are then applied in assessing the work of the court. For example, what influence might they have in deciding whether or not to grant permission to appeal? Are certain types of litigants, like governments, more likely to have their cases selected for appeal? Might that be due to political factors, the importance of the case, or the specialism of the judges deciding the application?

Another factor to be considered is panel selection. Since the court rarely if ever sits en banc, does the selection of judges to hear each case influence the outcome? Would a different panel – or a panel of different size – have come to a different conclusion?

Hanretty concludes, rather unsurprisingly, that relevant judicial specialisation has the largest effect on the probability of being chosen for a panel, and this is even more so in the more important cases. More interestingly, it turns out that judges with higher workloads tend to be more likely to be empanelled in later cases, as do those judges who tend more often to disagree with the President of the court.

With the cases chosen and the panel selected, the next question for Hanretty is which of the judges is or are to write the judgment(s) in the case, and whether they are leading, concurring or dissenting. Again, legal specialism is significant, though not the only factor. More controversial, says Hanretty when looking at dissenting judgments, is his finding “contrary to my own previously published research and prior beliefs, that it is possible to array judges of the Supreme Court on a dimension running from left to right”.

Finally, when it comes to the actual decision, the success rate of appellants hovers around 50% (which is not unexpected) but appellants in criminal cases are rather less likely to win (only around 40%) and those in family cases rather more (nearly 75%) with those in other areas of law hovering somewhere in between. Appellants are more likely to succeed if they have been supported by a higher number of lower court judgments. Again, this is not very surprising, but what I would be interested to know is the number of such cases that involve what might be termed “double reversal”, where the Court of Appeal, having reversed the trial judge, is in turn reversed by the Supreme Court, possibly only by a majority: such cases are often the most finely balanced and therefore legally challenging.

Hanretty sums up his work as follows:

“My depiction of the court is not a simple mix of myths dispelled or retained. Rather, I’ve tried to characterise the Supreme Court in a different and particular way — as a court of legal specialists. By this I mean that across many different types of behaviour, knowing the area of law of each case, and knowing which judges specialised in that area of law, is a useful guide to the court’s behaviour.”

I am grateful for Hanretty’s acknowledgement of the role of law reporters in validating the legal importance of certain cases and not others, and can record in the interests of transparency that I am one of the authors cited in his many sources.

My feelings about his quantitative analysis are mixed. There was something a bit Gradgrindian about all the facts and figures. Most of his conclusions seem to accord with one’s expectations, though no doubt it is useful to have them confirmed by reference to hard data. However, I am sceptical about the reliability of some of the factors on which it depends. For example, in assessing judicial specialisation, Hanretty says a judge “specialises in an area of law to the extent that she heard cases in that area of law during her judicial career before appointment to the Supreme Court.” Hanretty then sets out a detailed method for assessing this.

Now this all sounds very scientific and methodical. But what it completely overlooks is that judges enter the judicial state after two to three decades of practice as barristers or solicitors or in some cases academics. While it is not uncommon for judges to end up in different specialisms on the bench from their years of practice, it makes little sense to concentrate on the one to the complete exclusion of the other. The problem becomes all the more obvious when, as part of an exercise to assign specialisms to all the then current Supreme Court Justices, Hanretty was forced to conclude that “Lord Sumption, who was appointed straight [from] the bar and thus had no prior judicial specialisation, has been imputed values equal to the mean for English and Welsh judges”. This ignores the fact that Jonathan Sumption QC was for many years a well known commercial and public law barrister. His lack of judicial experience makes his area of professional practice all the more significant in the exercise Hanretty is attempting here.

On the other hand, Hanretty quotes Sumption himself saying he thinks that legal specialisation is “essentially bogus”, which if true would tend to minimise its effect as a factor. But if the data shows otherwise, maybe Sumption is wrong, or self-deceived?

It is interesting to compare Hanretty’s scientific analysis of the factors affecting something like the choice of who writes the leading judgment with the more anecdotal accounts given by the judges themselves. Here is Sumption again, explaining the process in an interview for Counsel magazine shortly before his retirement:

“We have a conference after the hearing. The junior member speaks first and we go upwards, each giving a mini extempore judgment of three to five minutes. Someone may then volunteer to write the main judgment; or the presiding judge may nominate someone to write because they are the acknowledged expert or their mini judgment expressed best the view in the room or because they haven’t done one lately. Justices do change their minds. A dissenter can end up winning round the majority and writing the lead judgment. Someone nominated to write the lead judgment may end up dissenting.”

Haphazard as this sounds, or at least unplanned, there is still a reference to the presiding judge nominating “the acknowledged expert”. Does that mean it bears out Hanretty’s thesis, or merely that Hanretty’s thesis accords with common sense and established practice?

However, the fact that I take issue with some of the data used does not detract from the value of the exercise. While it may be tempting to say this sort of thing works much better in other jurisdictions (such as the USA, where judges are more open about their political affiliations and more likely to vote, as it were, along party lines) it would be foolish to resort to a form of British exceptionalism by suggesting our judges should not be susceptible to any sort of quantitative evaluation. Judges are public servants and ought to be subject to public scrutiny. That’s what open justice is all about. The UK Supreme Court is a world leader in its transparency and should, I think, welcome Hanretty’s analysis, though it may do so with a raised eyebrow of ironic doubt. 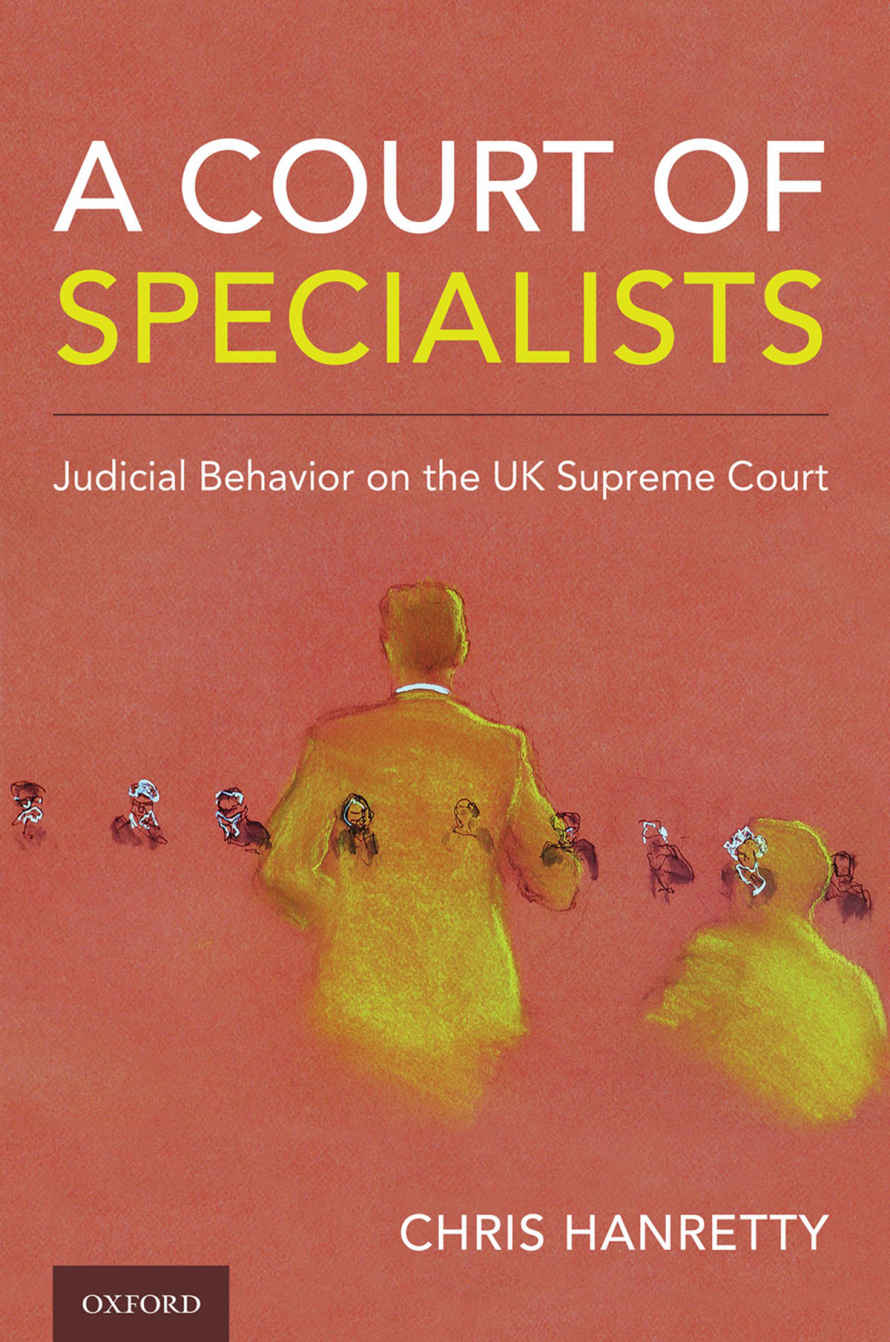 Featured image from book cover, by Isobel Williams (who has also reviewed this book on her blog, Drawing from an uncomfortable position)