Congratulations to Ben Haseldine, seen here on the left, receiving this year’s ICLR Pupillage Award from the Chair of our Council, Richard Fleck, on the right. The presentation took place at a small reception held at the Competition Appeal Tribunal in London. 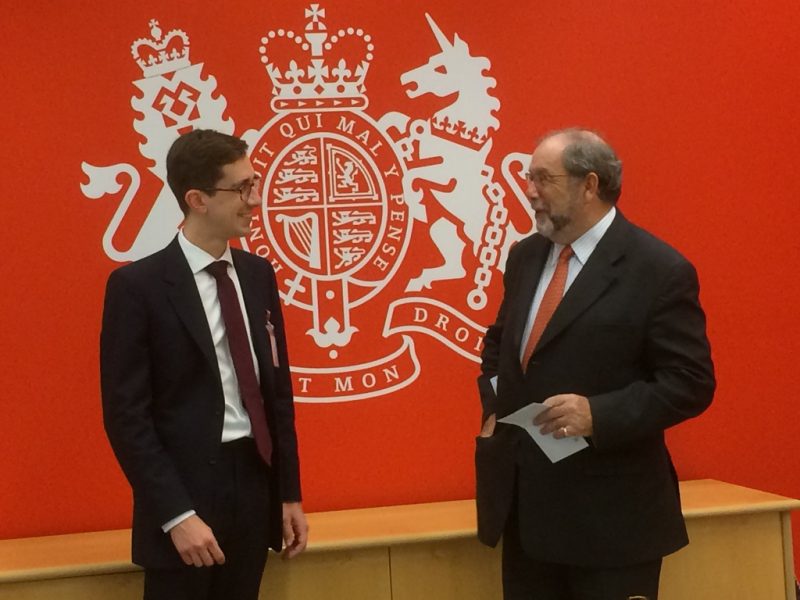 Ben is starting pupillage at 4 King’s Bench Walk, in the chambers of Timothy Raggatt QC, which has expertise in all areas of common law. Ben attended the King’s School, Peterborough, and studied law at University College, Oxford. After completing the Bar Professional Training Course in Birmginham, he worked as a freelance legal assistant, working with around a dozen barristers across London on all aspects of their cases. He then taught Land Law and Equity full time through an agency in Covent Garden, before accepting the position of legal assistant at Keating Chambers. He is hoping to incorporate these experiences of construction, contract law and professional negligence into his own varied practice.

The ICLR Pupillage Award was launched in 2015 to mark the 150th Anniversary of ICLR’s foundation in 1865. Last year’s winner was Sophia Stapleton, who did her pupillage at 2 Dr Johnson’s Building.

The purpose of the award is to provide direct financial assistance (a sum of £12,000) to a pupil during the course of their 12 month pupillage in chambers. To be eligible for the ICLR Pupillage Award, the candidate had to demonstrate that:

(1) They are taking up a confirmed offer of pupillage at a set of chambers; and

(2) The pupillage award they are to receive from chambers is not valued as being more than £18,000 for a twelve month pupillage (including basic award and guaranteed earnings)

Applications were subject to two criteria: financial need and merit.

Applicants had to write two short essays and, if and when shortlisted, a headnote for a Weekly Law Report based on an unreported transcript that we supplied.

The final decision was made by the judging panel; Mr Justice Roth, Margaret Bowron QC, and Clive Scowen, Barrister (Editor, the ICLR).

“As a charity, ICLR is always looking for new ways to support law students and those embarking on a career at the Bar – the ICLR Pupillage Award is a new way in which we aim to support students commencing pupillage in chambers.”

“The majority of ICLR’s staff are barristers, so we’re acutely aware of how challenging pupillage can be and how this has been exacerbated for some areas of the profession by recent cuts to legal aid.”