The 36th Annual Course of the International Association of Law Libraries in Atlanta, Georgia, USA will focus on “Civil Rights, Human Rights, and Other Critical Issues in U.S. Law”. Given both the location and recent events in the United States, it promises to be both interesting and highly topical. ICLR will be there. 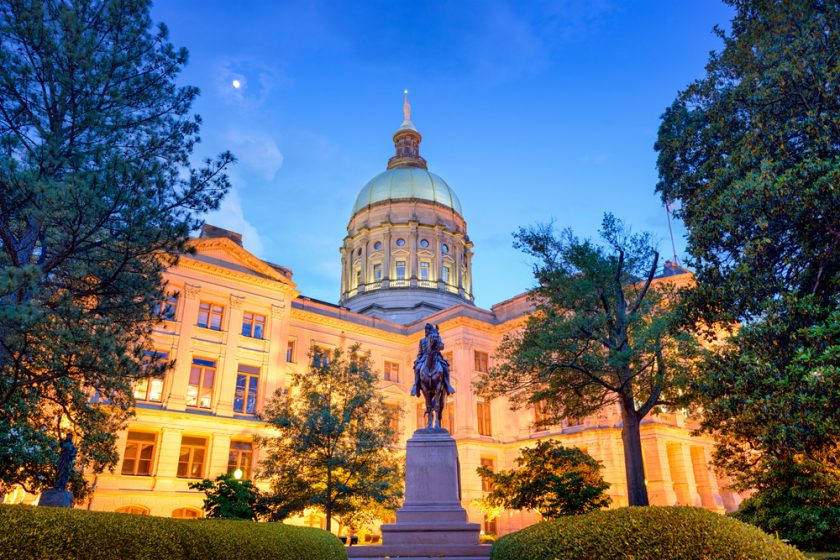 The conference takes place 22-26 October 2017, in Emory Conference Center Hotel, which is located just up the road from Emory Law School, said to be one of the nation’s top-ranked law schools. Among the other venues involved are the Fernbank Museum of Natural History, the Center for Civil and Human Rights in downtown Atlanta, and the Carter Center and Jimmy Carter Presidential Library and Museum.

Our featured image depicts the Georgia State Capitol, in front of which stands the equestrian statue of Confederate General and former Georgia Governor John Brown Gordon. But earlier this year, in the midst of controversy over the removal of other Confederate memorials, a new statue of the almost completely antithetical figure of Dr Martin Luther King Jr was unveiled close by, to commemorate in his home town the 54th anniversary of his “I have a dream” speech at the 1963 March on Washington. King was assassinated in 1968. According to Time Magazine:

“Bringing the statue into reality took multiple struggles. Officials had to negotiate with King’s family for the right to use his image. Then an artist was selected for the project, only to be killed in a motorcycle accident. After a lengthy screening, sculptor Martin Dawe was chosen to replace him.”

Commenting on the proximity of King’s memorial to that of Gordon, Georgia State University professor Tim Crimmins was quoted on the NPR website as saying that

“What [King] had to overcome had been established by John Brown Gordon… They’re on opposite sides of the north side of the building, but they represent suppression on the one hand, and the ability, the will to overcome it and the success of it with Martin Luther King Jr.”

The conference program includes sessions on “The Rise and Fall of Jim Crow: Civil Rights Struggles in the American South” and “Examining Difficult History and Memory through the Lens of Confederate Monuments” as well as a visit to the Center for Civil and Human Rights. It promises to be a very interesting and topical conference.

Paul Hastings, Account Manager, and Paul Magrath, Head of Product Development, will be representing ICLR, who are also one of the sponsors of the event. Drop by and chat, or come for a demo of ICLR.3, our fabulous new case law platform.