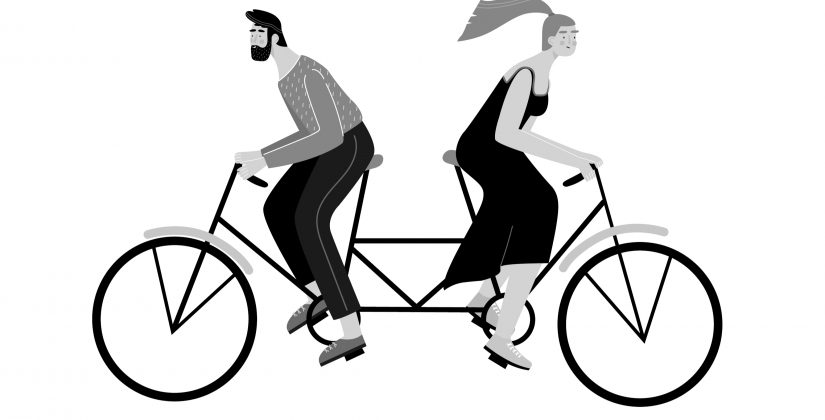 Dissolution of marriage and civil partnership: the new law

In the first post in this series of two I asked, of amendments to Matrimonial Causes Act 1973 (MCA 1973) for divorce and Civil Partnership Act 2004 (CPA 2004) for civil partnerships, and their supporting rules: how lawful are certain parts of the new legislation (statutory and delegated)? Specifically, I mentioned the substituted MCA s 1(3)(a). With the parallel CPA 2004 s 44(4)(a), which is in precisely the same terms, s 1(3)(a) says that a statement by one or both spouses or civil partners must be taken “to be conclusive evidence that the marriage has broken down irretrievably”. [References after this are to the parallel provisions in MCA 1973 and CPA 2004. The new rules, referred to below, apply to applications under both statutes.]

The amendments to Family Procedure Rules 2010 (FPR 2010) takes s 1(3)(a) two stages further. The new FPR 2010 r 7.1(3)(b) defines exclusively what it says are “disputed cases” – that is it attempts to tell family judges on what specific matrimonial and family proceedings under FPR 2010 Part 7 they can hear as family litigation.

The third subject – considered in the first post – feeds from s 1(3)(a). It leaves no scope in the new scheme – or very little – for possibilities, however remote, of reconciliation (see FPR 2010 r 7.19(5) in the first post). Have the rule-makers deliberately overridden possibilities for reconciliation which could be built into the new scheme where case law under the unamended MCA 1973 says something different, to what the rule-makers seem to propose?

The first two subjects above raise two public law questions, that is questions as to the lawfulness of what Parliament and the rule-makers (Family Procedure Rule Committee: FPRC) have legislated upon:

The main difference between the new scheme and the old is that, once the former is in force, there will be no need to prove one or more of the five (divorce) or four (civil partnership) facts to establish irretrievable breakdown. Blame as between parties (adultery or unreasonable behaviour) or statutory periods of living apart goes. However, alongside this essential reform is the amended MCA 1973 s 1(3) and CPA 2004 s 44(4) which both state:

“The court dealing with an application under subsection (1) must—

In other words, if one spouse or civil partner (A) says the marriage etc has irretrievably broken down then that must be accepted as final. Divorce or dissolution of civil partnership is on demand. This raises head-on a rights issue: does B have the right to argue the point in a civil court; and if so is s 1(3)(a) compatible with B’s human rights (Human Rights Act 1998 (HRA) s 4)?

Of the statute it must be said immediately: Parliament has the power to pass s 1(3)(a), and has done so. But has B a civil right which subsists, namely to require the court to hear their view – as against that of A – as to whether a marriage or civil partnership has irretrievably broken down (eg where there is a lengthy period of reconciliation following divorce application as discussed in the first post; and see Biggs v Biggs (below))?

“Right to a fair trial

1 In the determination of his civil rights and obligations or of any criminal charge against him, everyone is entitled to a fair and public hearing within a reasonable time by an independent and impartial tribunal established by law…. “

Is there any civil right to reply to denial of an assertion of irretrievable breakdown? If so, s 1(3)(a) may be incompatible with the Convention. If there is a right does the law fairly permit a person to call upon the court to protect it. Much of the human rights case law involves claims as between individuals and the state; and not private law claims relating to statutory interpretation, as here.

The Strasbourg court describes civil rights as “autonomous”, that is to say such rights do not depend on the law of the individual state concerned. In Runa Begum v Tower Hamlets LBC [2003] UKHL 5, [2003] 2 AC 430, Lord Millett characterised the question of what are “civil rights” as “very difficult”:

“[82] Whether those rights should be classified as ‘civil rights’ within the meaning of Art 6.1 is, however, a very difficult question. According to the consistent case law of the Strasbourg court the concept of ‘civil rights and obligations’ is autonomous. Its scope cannot be determined solely by reference to the domestic law of the respondent state: König v Federal Republic of Germany (1978) 2 EHRR 170, 192–193, para 88….”

“[89] Whilst the Court thus concludes that the concept of ‘civil rights and obligations’ is autonomous, it nevertheless does not consider that, in this context, the legislation of the State concerned is without importance. Whether or not a right is to be regarded as civil within the meaning of this expression in the Convention must be determined by reference to the substantive content and effects of the right – and not its legal classification – under the domestic law of the State concerned….”

In Runa Begum (above) Lord Bingham looked at the claim and whether the claimant had been given a fair trial of her right to say she was intentionally homeless, where her right to challenge in the county court was limited to challenge of the reviewing officer’s decision on law only. Lord Bingham said (at [4]): “Runa Begum’s right recognised in domestic law also a ‘civil right’ within the autonomous meaning given to that expression for purposes of Art 6.1…”. Lord Millett summarised the question in Runa Begum as whether the referral to a ‘reviewing officer’ determined Runa Begum’s civil rights within the meaning of Art 6.1:

“[78]… ‘The Strasbourg Court’ has repeatedly stated that the first step is to ascertain whether there was a contestation (dispute) over a ‘right’ which can be said, at least on arguable grounds, to be recognised under national law. The dispute must be genuine and serious; it may relate not only to the actual existence of a right but also to its scope and the manner of its exercise; and the outcome of the proceedings must be directly decisive of the right in question: see, for example, Mennitto v Italy (2000) 34 EHRR 1122, 1129, para 23.”

“[23]  The Court reiterates that, according to the principles laid down in its case-law, it must first ascertain whether there was a ‘dispute’ (‘contestation’) over a ‘right’ which can be said, at least on arguable grounds, to be recognised under domestic law. The dispute must be genuine and serious; it may relate not only to the actual existence of a right but also to its scope and the manner of its exercise. The outcome of the proceedings must be directly decisive for the right in question… Lastly, the right must be a ‘civil right.”

The question, in these terms, must be whether a spouse of civil partner has a right protected by Art 6.1 to a trial – to ‘dispute’ or ‘contest’ – that their marriage has broken down. On county court referral, Lord Millett concluded (Runa Begum at [84]) that a difficulty in deciding her claim as “an assertion of her ‘civil rights’ within the meaning of Art 6.1 arises from the fact that the jurisprudence of the Strasbourg court in relation to the scope of Art 6.1 is still in course of development.” Will this be the same for MCA s 1(3)(a)? Runa Begum’s appeal was refused.

Rule-maker and the powers of the court

If a respondent (B), or indeed either party if it relates to alleged reconciliation, has the “civil right” to argue the irretrievable breakdown point, where should it be argued? It goes alongside rights to argue the validity of marriage (Family Law Act 1986 s 55), surely? Under the rules s 55 matters can be a “disputed” case under FPR 2010 r 7.1(3)(a). But as the rules now stand an irretrievability question is denied to family courts litigants.

On the contrary, the rules have categorised all “matrimonial and civil partnership proceedings” (FPR 2010 r 7.1(1)) as “disputed” or “standard”. “Standard cases” will be the vast majority and are defined as not a “disputed case”. A “disputed case” is defined as certain nullity proceedings and (under r 7.1(3)(b)):

“(b) matrimonial or civil partnership proceedings (excluding nullity proceedings) in which—

(i) an answer has been filed disputing—

(aa) the validity or subsistence of the marriage or civil partnership; or

(ab) the jurisdiction of the court to entertain the proceedings,

and has not been struck out;…”

That is to say, the Family Procedure Rule Committee (FPRC) has defined on a very narrow canvas the full ambit of what it says can be “disputed” as matrimonial etc proceedings; but do they have power to do this? It sounds as though the FPRC is seeking, contrary to Magna Carta, to “deny or delay, [a spouse or partner’s] right or justice”. The Committee’s powers are defined by Courts Act 2003 ss 75 and 76. Unless Parliament says so, they cannot change the law. This was clearly and simply explained by Lady Hale in Dunhill v Burgin (Nos 1 and 2) [2014] UKSC 18, [2014] 1 WLR 933 at [27]:

“[Court rules cannot] change the substantive law unless expressly permitted so to do by statute: see Re Grosvenor Hotel Ltd (No 2) [1965] Ch 1210. Thus, it is argued, section 1 of the Civil Procedure Act 1997 gave the Civil Procedure Rule Committee power to make rules governing “the practice and procedure” to be followed in the civil courts and as further provided in Schedule 1 to the Act. Paragraph 4 of that Schedule provides that the Rules may modify the rules of evidence, thus showing that where it is intended that the Rules could modify the substantive law, express provision is made for this.”

Power to “modify” the law is provided to the FPRC, in the same terms as civil proceedings rule-makers, in Courts Act 2003. It is limited to s 76(3), that is “Family Procedure Rules may modify the rules of evidence as they apply to family proceedings”. Within the limits in Courts Act 2003 ss 75 and 76 the rule-makers – as distinct from Parliament – have no express power to limit the extent of the disputes a family court can hear arising from MCA 1973 and CPA 2004.

This post returns to Mennitto v Italy (above) and its emphasis on the need to decide “whether there was a ‘dispute’ (‘contestation’) over a ‘right’”. The answer for s 1(3)(a) is whether it signals a “dispute” which the family courts should be able to resolve; and if so whether the High Court will consider the compatibility of s 1(3)(a) with Art 6.1. A “dispute” arises. That is clear. Whether a spouse or partner has a civil right to raise this issue in a family court is the question which s 1(3)(a) and its compatibility begs.

If r 7.1(3) is ultra vires the rule-makers then so too is r 7.19(5), to the extent that it fails to consider review of a couple’s position where they appear to have become reconciled; and where – as was Payne J in Biggs v Biggs and Wheatley [1977] Fam 1 – the court considers that it is being asked to make a finding and a court order as to something which it knows, or believes, to be untrue.