In this guest post Prof Rachael Mulheron QC (Hon) discusses the picturesque background to Wilkinson v Downton, a landmark case in the law of tort. (Reprinted with kind permission from a brochure published by the Department of Law, Queen Mary University of London with funding from the Society of Legal Scholars.)… Continue reading 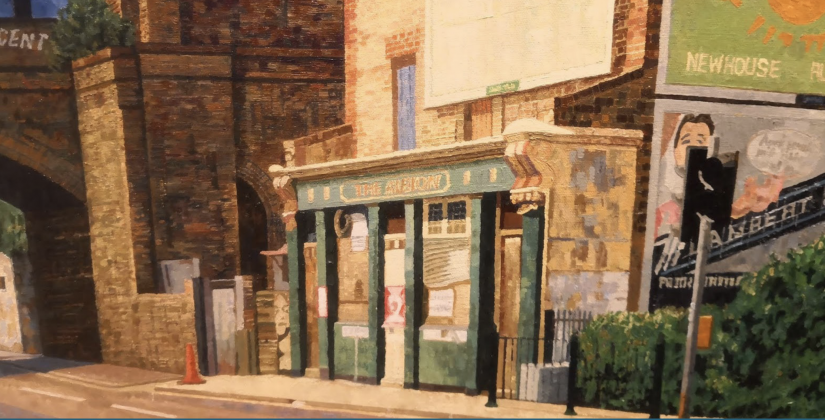 An important slice of legal history was created, courtesy of a practical-joke-gone-wrong in the Albion Pub on 9 April 1896. The pub was built in 1881, and Thomas Wilkinson became publican in 1895, a year before the incident occurred.

The pub was located at 25 St Paul’s Road (now called St Paul’s Way), in Bow Common, London, E3. It was a popular pub, given that it was located amongst dense housing and was adjacent to the railway.

What happened at the pub?

On 9 April 1896, Thomas Wilkinson travelled by train to the races at Harlow. He left his wife, Lavinia Wilkinson, to manage the bar while he was away.

Mr Downton, a customer, visited the pub that evening, and falsely told Mrs Wilkinson, as an unpleasant practical joke, that her husband had been injured in an accident involving a horse drawn vehicle on his way back from the races. He told Mrs Wilkinson that her husband was lying in The Elms pub in Leytonstone ‘smashed up’ with two broken legs and other serious injuries, and that she should fetch him urgently. Mrs Wilkinson sent other people by train to reach her husband, but they could not find him.

In fact, Thomas Wilkinson returned home from the races later that evening, safely and uninjured. However, the effects of Mr Downton’s practical joke on Mrs Wilkinson were dramatic. She became seriously ill. As well as vomiting, her hair turned white, and she suffered ‘a violent shock to her nervous system’ amounting to a psychiatric injury. All of this required extensive and lengthy medical treatment.

Mrs Wilkinson sued Mr Downton for compensation for the injuries which she had suffered.

What was the case about?

The case of Wilkinson v Downton [1897] 2 QB 57 was heard by Mr Justice Wright, a highly-respected judge of the Queen’s Bench Division. Mrs Wilkinson recovered the cost of the railway fares which had been incurred in the fruitless train journey to Leytonstone under the tort of fraudulent misrepresentation (deceit). 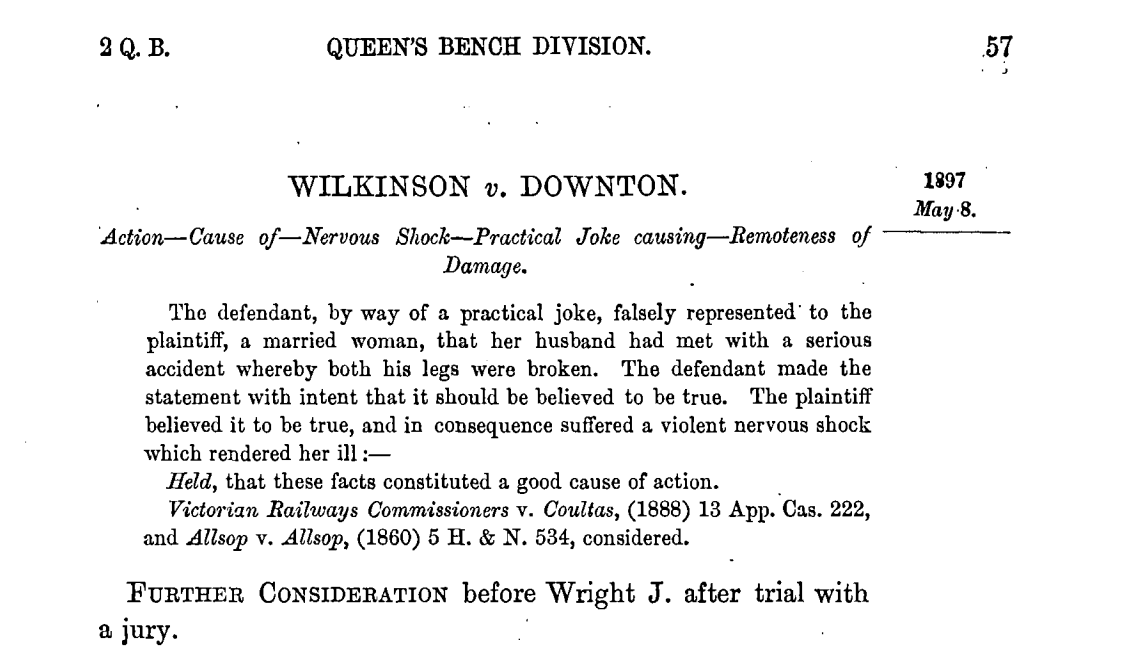 Why is the case legally important?

The legal difficulty was that, at that time, it was not possible for English courts to allow for the recovery of compensation for psychiatric injury, where the conduct of the wrongdoer was negligent (i.e. where the statement by Mr Downton was made without reasonable care). Wright J was faced with an immediate dilemma. Should he disallow that part of Mrs Wilkinson’s claim altogether?

Wright J ultimately permitted Mrs Wilkinson to recover damages of £100 for her psychiatric harm. This was explained on the basis that Mr Downton had intentionally inflicted psychiatric damage on his victim via the false statement that her husband was seriously injured. This became a newly-invented cause of action, a tort which became known as ‘the Rule in Wilkinson v Downton’.

Mr Downton’s intention was not ‘actual’, of course. However, Mr Downton’s intent was construed by Wright J to be ‘imputed’ or ‘calculated’, on the basis that Mr Downton’s false statement was deliberate, and it was likely that psychiatric injury would result to Mrs Wilkinson from its telling.

How has the case been applied since?

Over the years, the tort has been expanded to cover, not only false statements, but also verbal threats, and intentional conduct towards a victim which causes that victim physical or psychiatric harm. The tort has been often sued upon, but not often successfully.

However, it was the basis of a successful claim for damages in England’s first ‘sexting’ case in 2015 (in ABC v West Heath 2000 Ltd [2015] EWHC 2687 (QB), QBD, where the teacher’s solicitation of sexual images from his pupil fell within the ambit of the tort.

The tort has also travelled, as so much common law does, to the four corners of the common law world, where it applies (sometimes with variations) from Canada to Samoa, and from the United States to Australia.

What is the legacy of the case?

The tort has been somewhat overtaken by the fact that negligently-inflicted psychiatric injury is now available in English law (and has been since 1901). However, the Tort of Wilkinson v Downton remains part of the fabric of English Tort law (and of common law regimes elsewhere).

It may have been spawned by a simple practical joke, but the tort has come to stand for the right to recovery of compensation where a wrongdoer intentionally inflicts upon his victim either physical injury or emotional distress giving rise to psychiatric injury via false statements, verbal threats, or conduct.

What became of the Albion Pub?

The Albion Pub closed in 1990, and was demolished in 2005. A block of flats, the Sphere Apartments, now stands on the site where the pub once stood.

Plans are underway to seek permission to have a permanent plaque erected on this site, to commemorate the event of important legal significance which occurred here in 1896.

The Tort of Wilkinson v Downton has a special significance for Queen Mary University of London. Its Law School, which was established in 1965, is the closest school, geographically, to the site of the now-demolished Albion Pub, where the practical joke in 1896 spawned the development of the new cause of action.

Rachael Mulheron QC (Hon) is Professor of Tort Law and Civil Justice at the Department of Law, Queen Mary University of London.

Read the original brochure from which this post is reproduced, published by the Department of Law, Queen Mary University of London with funding from the Society of Legal Scholars.

Featured image: painting of The Albion by Doreen Fletcher, reproduced from the cover of the brochure.