Film review: On the Basis of Sex

Ruth Bader Ginsburg is a justice of the Supreme Court of the United States who has changed the course of legal history in America and inspired generations of lawyers by her indomitable spirit. Paul Magrath reviews a film which charts the events in her life leading up to her first major court triumph in the continuing struggle against sex discrimination.… Continue reading 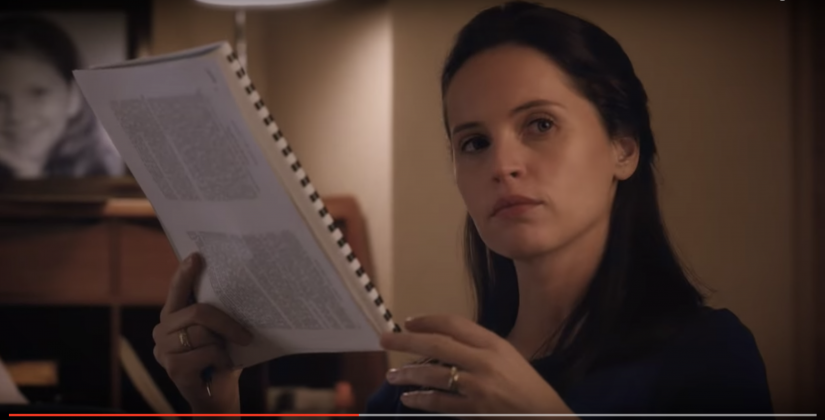 There are moments in On The Basis of Sex when you can imagine the lawyers in the audience — and there were probably quite a few of them in the local fleapit in Islington — wanting to punch the air with their fists and shout ‘yesss!’ But being lawyers, of course, they merely nursed a private grin of triumph.

The film charts the early life of Ruth Bader Ginsburg, the longest serving female justice of the US Supreme Court, from her arrival at Harvard Law School in 1956 to her first court triumph, in the Tenth Circuit Court of Appeals in Denver, in 1971. Together with her husband, Marty, and with the backing of the American Civil Liberties Union, she challenged an obscure tax law that discriminated against unmarried men, and won: Moritz v. Commissioner of Internal Revenue, 469 F. 2d 466 (1972). It was the first of a series of gender-discrimination cases that she fought with ACLU in a career that placed her in the vanguard of the legal struggle for women’s rights.

At the time she took on the Moritz case (prompted by Marty, an established tax lawyer), Ruth was working as a professor at Rutgers Law School teaching, among other things, a class on women and the law. But she hadn’t intended to teach. She always wanted to practise. The film shows clearly how many obstacles were ranged against her, and other women seeking to achieve that ambition, at the time.

When she arrives at Harvard she is one of only nine female students in her year. At a dinner to welcome them the dean, Erwin Griswold, asks each of them in turn to justify their taking up a place in the school that could have been occupied by a man. When her husband Marty is critically ill, she not only continues her own classes but sits in for him in his, enabling both of them to continue their studies. At the time they have a baby daughter; later they will also have a son. When Marty graduates from Harvard and gets a job in New York City, she leaves Harvard as well and completes her studies at Columbia, graduating equal first in her class. Despite her brilliance in the two years she spent there, Dean Griswold meanly declines to allow her to claim the benefit of a Harvard qualification.

Then she tries to get a job. But to no avail. Though her qualities as a lawyer are widely acknowledged, her characteristics as a person stand in her way. As she later explained at a Harvard reunion,

“I struck out on three grounds,” she said. “I was Jewish, a woman, and a mother. The first raised one eyebrow; the second, two; the third made me indubitably inadmissible.”

The film is eloquent on the second and third of these objections, less so on the first. But the patronising sexism of the 1950s is much in evidence, and there is none of the glamour of the New York depicted in Mad Men here.

By the time we jump forward to the 1970s, the Ginsburgs’ teenage daughter Jane has joined the student protesters, sneaking off school to listen to Gloria Steinem. Mother and daughter argue over the morality of To Kill a Mockingbird. Ruth complains to Marty about how stubborn Jane is. Marty says “Hmm. I wonder where she gets that from?” (Knowing smirk.) But come the Big Case, and Jane is on board along with the students from Ruth’s class at Rutgers, as they prep the case in the Ginsburgs’ living room. Later on, to test the case Ruth plans to argue, they set up a moot in this same living room. Melvyn Wulf of the ACLU chairs the bench, at the dining table, with a meat tenderiser as the gavel, while the TV serves as the advocates’ lectern and Ruth rehearses her submissions.

It’s probably my favourite scene in the film, because it’s touching as well as teaching. But a lot of the film is too predictably didactic to be genuinely enjoyable. It is not so much historical as ‘boo-hiss’-torical: imbued with a smugly triumphal hindsight. You know what’s going to happen, so the only question is how. Sometimes the facts seem to have been massaged to fit the narrative. For example, I was surprised that when Ruth steps into one of Marty’s second year classes they are discussing the doctrine of precedent: wouldn’t such a foundational topic be covered in the first year, the first term even, of an English law degree? Even more so at Harvard where, from day one, the law seems to be taught from the basis of individual cases. But there’s a quote about the common law they need to get into the script — about how judge-made law may not change with the weather of the day, but it does with the climate of the era — so that’s how they do it.

The film’s generally uncritical, if not wholly hagiographic, approach may owe something to the fact that the script was written by Ruth’s nephew, Daniel Stiepleman. Playing Ruth, Felicity Jones seems to have only two emotions: angry, or about to cry. As her husband Marty, Armie Hammer is unflappably urbane throughout. The rest of the cast is good, including Sam Waterston as Dean Griswold at Harvard, and Justin Theroux as Mel Wulf of the ACLU. And despite its limitations, the film has enough of those moments of recognition, if not air-punching legal triumph, for lawyers to not only enjoy but be inspired by it. Ruth Bader Ginsburg is an inspiration, after all. There’s no one quite like her, and if the film doesn’t quite do her justice, neither does it deny her appeal.

Paul Magrath hasn’t watched the ‘other’ film about Ruth Bader Ginsburg, the documentary RBG, which came out last year, but as soon as he has done, he will review and compare it here.