Book Review: A Bit of A Stretch – The Diaries of A Prisoner, by Chris Atkins

Dr Jo Beswick, senior law lecturer at Staffordshire University, reviews a former prisoner’s account of their journey through the criminal justice system, and finds that it challenges many of the popular misconceptions about prison life.… Continue reading This book written by a former prisoner engaged my attention from the front cover onwards. The cover displaying the symbolic bowl of porridge and featuring a glowing endorsement “Funny, Shocking and Powerful” by the best-selling author the Secret Barrister, and “Fabulous, Candid, funny and never self-pitying, this is a must-read into why prison simply doesn’t work” Jon Snow, presenter, Channel 4 news, intrigued me enough to order this book for bizarrely enough my ‘off duty’ reading during the Covid-19 lockdown.

The author Chris Atkins does not conform to many people’s stereotyped idea of a prisoner. An Oxford educated and BAFTA nominated filmmaker who had worked on well known TV documentaries. His story vividly illustrates how people from many different walks of life might find themselves on the wrong side of the law given certain circumstances. Atkins does not attempt to excuse his behaviour but given the nature and circumstances of his crime (white collar financial offence) it challenges the erroneous misconception that imprisonment is something which could only ever possibly happen to dangerous anti-social miscreants.  A misconception again fuelled by tabloid editors and even certain members of parliament. So, finding himself sentenced to five years ‘at Her Majesty’s Pleasure’ he began to keep a diary during his time in prison. His diary is not only a way of challenging the picture of who populates our prisons and what has lead them there, but also vividly demonstrates the institutions’ gross inefficiency from the perspectives of those incarcerated in them, and also how they fail society more generally in the longer-term objective of rehabilitation.

He vividly details the brutalising reality of prison life and how many prisoners were confined to their cells for 23 hours a day. Such excessive periods of lock-up prevented prisoners from attending educational courses, or other training, intended to help them when they returned to life outside the institution. Such was the extent of their confinement that even calling home in order to maintain relationships and other family ties (which can go some way to prevent the prisoner from reoffending in the future) was problematic at best. His frustration at this situation is palpable given the contemporaneous public statement by Liz Truss that ’a prisoner’s family is the most effective resettlement agency’.[1] (Atkins page 65). Indeed, Wandsworth was so understaffed at the time of Atkins’ incarceration that at times people were not even unlocked for medical appointments.

These excessive periods of lock-up were caused by staff shortages. The staff shortages had been caused by the cutting of prison officers by a third despite the inmate population remaining constant (page 66).

This book demonstrates the risk of desensitising and dehumanising individuals. Details of his conditions (and those of his fellow detainees at HMP Wandsworth) are irreconcilable with the portrayal of prison life in many tabloid newspapers. It is often the small and mundane details which left me most aghast. For example, the information that 180 men had to share just six shower heads (in two opposing rows: p 71). Thus the basic dignity and comfort offered by personal hygiene was often made extremely difficult and amazingly irregular in its availability (sometimes as infrequently as once in five days). Even the hardest hearted might question whether a regime which leads to suicide and self-harm might not be a tad excessive.

The population of Wandsworth at that time also illustrated another major problem with the system, as one-third of its inmates were on pre-trial remand so not convicted of any crime.

Even those who most ardently adhere to the notion that a prison sentence should primarily be about the punishment of the prisoner, might be shaken by the sheer inefficiency of our system when it comes to the other aim of imprisonment – rehabilitation. Atkins suggests that with the worst reoffending rates in Europe with forty-eight per cent or prisoners finding themselves on the wrong side of the law again within twelve months (page 7) the current regime is not effectively using public resources for rehabilitation. Furthermore, the negative impact of imprisonment (whether causative or not) is the fact that children with a parent in prison are twice as likely to have mental health issues, 65% of boys with a convicted father will later go on to offend themselves. (page 165).

And how the impact of some legislation on actual prisoners might not have been that anticipated by the legislature. That a prison friend of his ‘Ted’ when subject to proceedings brought under the Proceeds of Crime Act, and the threat of an extra three and a half years in prison if he didn’t ‘stump up’ the required amount, calculated that if he were sentenced to the additional time he would effectively be ‘paid’ £1,000 a day to stay in prison (page 137).

Atkins book primarily focuses on his own experiences but highlights the above important issues and offers some limited suggestions for reform including; adequate staffing, humane visiting and the promotion of literacy courses (as fifty per cent of prisoners are functionally illiterate). However, this certainly does not read as a dry monologue. It is lively and engaging, as the characters (whose names have been changed to protect individuals) are painted as vividly as any novel. It made me laugh many times and caused my eyes to become a little damp at others. I would recommend this book to anyone who has any interest in the criminal justice system, prisons, or even the general reader who wishes to gain an insight into the topic of law and order – so often the subject of party-political hyperbole. 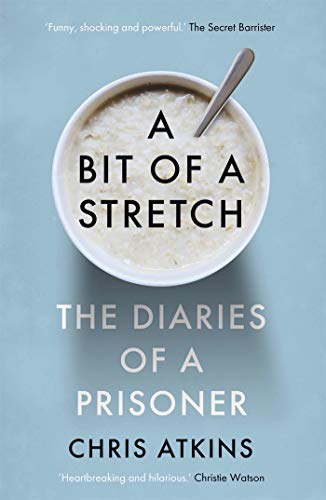 [1] Atkins refer to this statement taken from Elizabeth Truss outlines her views on sentencing and the size of the prison population at The Centre for Social Justice.