The subjects covered in the sessions were fairly broad, as suggested by the official title of the course Within and in Between: German Legal Tradition in Times of Internationalisation and Beyond. But the takeaway for us was more specific.

Set against a background of the city’s history over the last century, the devastations wrought by the rise and fall of the Third Reich and the Berlin wall which divided the city for nearly 30 years, the theme for our experience might best be summed up in a single word…

First and foremost, of course, is the restoration of the fabric of the city after so much division and destruction. When I last visited, some two decades ago, the city was still reeling from the effects of the collapse of the Iron Curtain and its eastern half’s long period of subservience to the Soviet yoke. Reunification was a decision but it was not yet a fact. The eastern half of the city retained much of its pre-war character, lovingly restored in its 19th and early 20th century architectural styles, interspersed with clumsy neoclassical tributes to the dictatorship of the proletariat. The western half had long given way to the temptations of commercial redevelopment: there were more attractive modern buildings, but fewer preservations of the older character of the city, at any rate in my impression.

This time the modernisation was both more pervasive and more harmonious. Some evidence of the city’s past nevertheless remained, consciously preserved as a memorial to the victims of the injustices visited upon its population. Thus, that crudely solid tribute to Nazi militarism, the Air Ministry building (now housing the Finance Ministry) remains standing, not far from the elegant neo-Renaissance Martin Gropius Bau art gallery and the rebuilt Bundesrat (federal council) building, which occupies a space once inhabited by the family of the composers Felix and Fanny Mendelssohn.

Across the road is a section of the remnant Wall, preserved as part of an exhibit entitled “The Topography of Terror”, which is a must-see for anyone interested in gaining an insight into the long nightmare that began in the early 1930s and continued for many of the city’s inhabitants until the late 1980s, when the grip of totalitarianism was finally let go. From a well-chosen series of photographs and documents, with explanatory captions, ranged along the inner course of a disused segment of wall, the visitor learns about the insidious power of the Nazi party, its gradual ratcheting up of legal perversity, pseudo-scientific delusion and political brutality, and the struggles of those who tried to resist or escape it, or who by virtue of their minority status were targeted for especially grotesque mistreatment.

This exhibit falls on a route, the Way of the Wall, which we took from the Reichstag to the north of the Tiergarten, down past the Brandenburg Gate, to the mysteriously monumental Holocaust Memorial, and thence, by way of the Topography of Terror, to Checkpoint Charlie, where there is another museum, this time depicting the horrors of Cold War occupation and memorabilia of the many daring attempts at escape.

In this context, one of the sessions in the course, entitled “Reassessing the Nuremberg Trials”, was especially relevant. Dr Kim Christian Priemel, a fellow of both Cambridge and Harvard universities, among others, who has written extensively on the Nuremberg Trials, discussed their significance in re-establishing in post-war Germany a sense of justice and the Rule of Law. Though flawed in many respects, both in terms of procedure and evidence, and also in the limitations to their scope (the fact that the Soviet Russians were involved precluded many war crimes in the east being properly investigated), the trials offered a vision of “normal” justice to a people for whom, over the Nazi period, the rule of law had been perverted. Nuremberg was significant as a location, too, since it was also the site of those massed rallies where the will of the people had been corrupted before and during the war. The trials that took place afterwards were the occasion where, Dr Priemel said, “Germany re-found its rule of law” and affirmed the concept of “never again”.

As this was a conference of librarians, Dr Priemel also discussed the paperwork of the trial – the books they read, the collection and documentation of evidence, the keeping of records, and the storage (at various locations, including now the International Court of Justice at the Hague) of the archives – and their place in the longer term development of an international war crimes jurisdiction.

Later, we were taken on a tour of the Bundesrat, and given an explanation of how the Federal Council operates, as one of five permanent constitutional bodies of the modern German state. The re-establishment of a federal system of government covering the entire country was a major feature of reunification: a political restoration which enabled democratic accountability to extend across the whole of Germany.

Other sessions discussed the wider politics of the European Union, and the central role played by Germany in its institutions and commitment to peaceful Europe-wide cooperation, as well as more specific topics such as women’s rights in German history, the difficulties of reconciling different systems of land law during reunification, and the development of legal blogs on scientific subjects.

Finally, the last afternoon was devoted the ever-topical subject of human rights, and the role of Germany’s National Human Rights Institute. Jan-Michael Arend explained the institute’s role in promoting human rights in Germany and how human rights were embedded in the German legal system. Interestingly, he pointed out that the reasoning of the European Court of Human Rights was not regarded as legally binding, but it was something the constitutional court would take into account and not reject without good reason. (This shows that opponents of Britain’s continued relationship with the Strasbourg court are wrong to suppose that our courts are bound to follow, rather than simply take into account, its decisions.)

Given the debate that is currently raging in Britain about the future of the Human Rights Act, I could not resist asking Jan-Michael Arend, at the end of the session, how this was viewed in Germany, and whether the risk of Britain’s withdrawal was regarded with dismay. His response was to observe that there was no equivalent movement in Germany for any recalibration of its relationship with the Strasbourg court; that diplomatically Germany was anxious about Britain’s current stance, and waiting to see what would happen, but no one thought there was any risk of its affecting Germany’s attitude to human rights. There was also discussion about the positive momentum in Germany in favour of the refugees, very much in the news at the time, and tending to support a view of the centrality of human rights and respect for the individual in modern German political culture.

Relaxation and Restoration (of delegates)

Outside the sessions, delegates milled around in the exhibition space at the Berlin State Library, where ICLR shared a stand with Wildy’s legal bookshop, manned by Steve Ross. We caught up with a few old friends among the librarians in attendance, and made the acquaintance of some new ones. There was plenty of enthusiasm for our demonstrations of the latest version of ICLR Online, version 2.5 launched in July, with its addition of legislation search, case browse and session history features (for more details, see here).

At the end of the day, we made the most of Berlin’s bars and restaurants, and some of the cultural goodies on offer. One evening a number of us (including Kevin Laws, Steve Ross and John Eaton, librarian at University of Manitoba) went to a football match (Hertha Berlin v FC Koln) which took place at the historic (and restored, despite its Nazi heritage) 1936 Olympic Games stadium (image below). I took the opportunity to visit the Kammermusiksaal (chamber music hall) of the famous Berliner Philhamoniker concert hall complex in Herbert von Karajan Straße and heard a concert of piano quartets and quintets by Mozart, Frank Martin and Robert Schumann, which was delightful.

Not far from our hotel, situated on the southern side of that extensive central (but surprisingly wooded) park, the Tiergarten, lay Potsdamer Platz, where a cluster of glassy new structures surrounded something called the Sony Centre, a sort of hi-tech glass and steel wigwam beneath which shops and restaurants circled a lofty atrium. Here Kevin Laws, our CEO, and I ate, at an Australian barbecue restaurant, a kangaroo steak (which was surprisingly lean and succulent, though not particularly flavourful, a bit like ostrich meat), washed down with a passable shiraz cabernet. But the wine was uncharacteristic: most of the time in Berlin we drank beer. It seemed a case of “when in Rome…” – and the beer was certainly both plentiful and refreshing.

Among the other culinary highlights was probably the biggest Wienerschnitzel I’ve ever seen (on my plate), alongside a glass of Hefeweizen beer, which was delicious, and that popular street snack, the Curry Wurst (a sausage enhanced with curry-powdered ketchup – which is “frankly” not up to much). 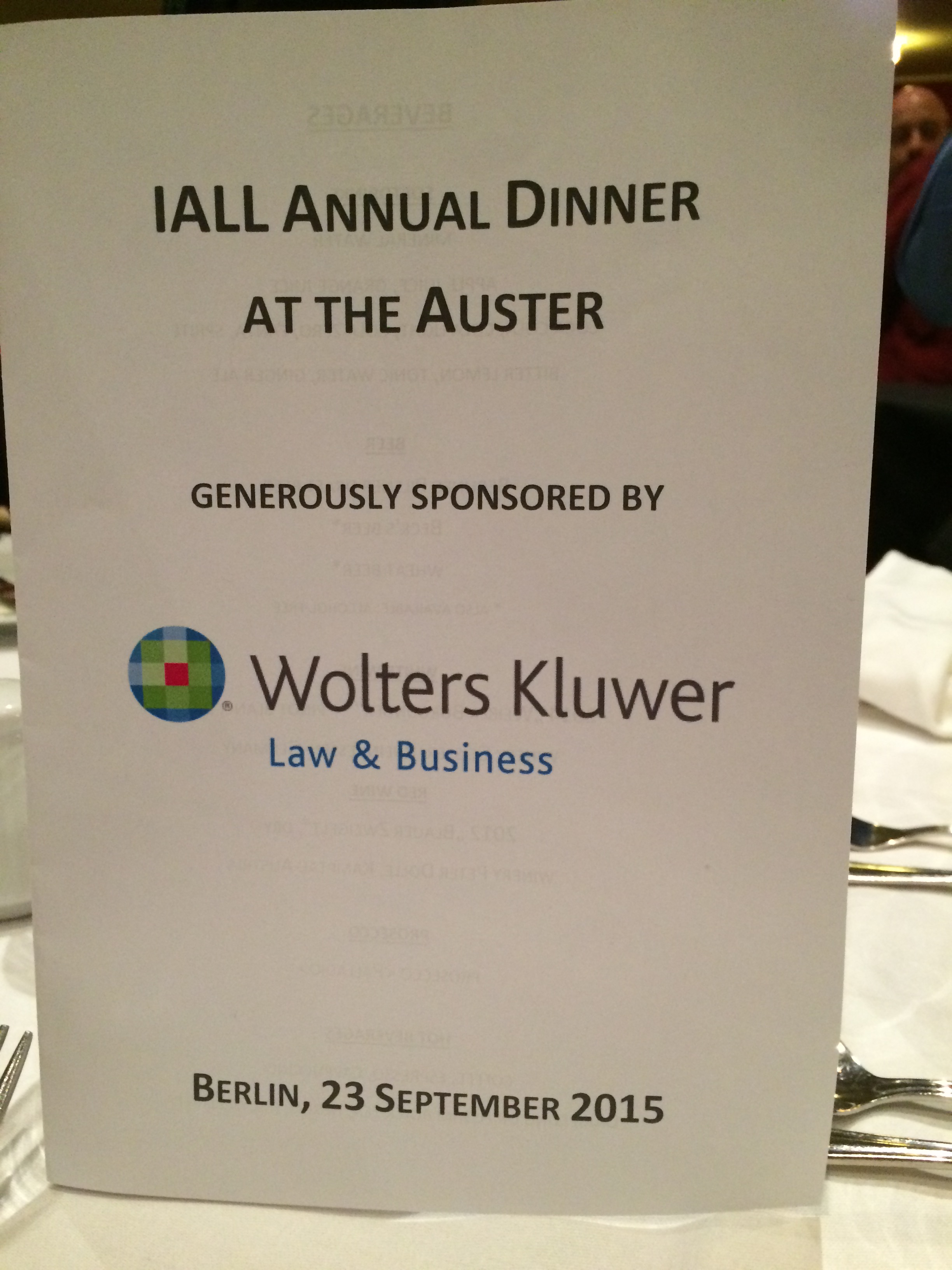 On the last night, the dinner for all the delegates was hosted by Wolters Kluwer at the Auster restaurant to the north of the Tiergarten. Those who stayed for an optional extra day had the opportunity of taking a river trip in a boat on the Spree, and seeing some more of the sights. But duty called us home, and Kevin and I reluctantly boarded our flight back to Heathrow armed with chocolates for our families and a consciousness that no one can quit Berlin without a pang for its hard-won freedoms.

This post was written by Paul Magrath, Head of Product Development and Online Content at ICLR. It does not necessarily represent the opinions of ICLR as an organisation.